East Riding College have teamed up with Pontefract-based meat producer Dovecote Park to offer butchery apprenticeships to young people in the region.
Following the first intake onto its very popular apprenticeship programme, the expanding business recruited a fresh batch of male and female employees in 2016. Dovecote Park butchery apprentices are guaranteed a permanent position on successful completion of their 18-month programme and join a 700-strong workforce.
Penny Marlow, human resources manager for Dovecote Park said, “This is a fantastic opportunity to join this hugely successful, privately owned business and develop a career as a butcher. As well as earning a wage during the apprenticeship, successful applicants receive ongoing training and development to support their career progression, as well as being appointed to a full-time role on achievement of the programme.
“We will have taken on 12 apprenticeships in the past year, which is a sign of Dovecote Park’s growth and excellent news for the local economy.”
Luci Scott, business development manager at East Riding College, said: “We are delighted to be working with Dovecote Park. Their apprenticeship programme has gone from strength to strength since the successful recruitment of the first intake in 2015. I am really impressed with the experience the apprentices are getting, Dovecote Park is a model apprentice employer.”
The apprenticeship is based at the company’s premises in Stapleton, near Pontefract, and involves learning knife skills to fully butcher hind quarters, fore quarters and flanks of beef carcasses whilst maintaining food hygiene, legality and company standards.
Apprentices enrol on an Intermediate Apprenticeship in Food and Drink (Meat and Poultry Pathway), and East Riding College provide training on the company premises.
Dovecote Park supplies the very finest British beef, veal and venison to Waitrose supermarkets nationwide and prides itself on maintaining the highest standards of animal welfare and husbandry.

Watch their video case study to hear and see more: 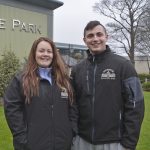